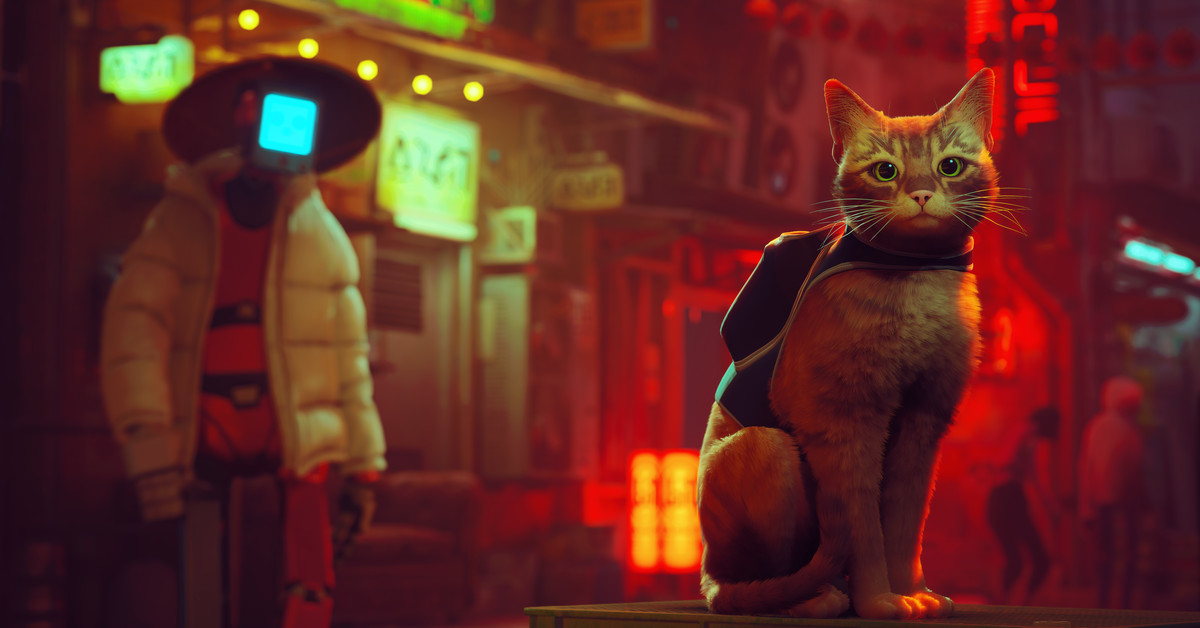 Wander has a lot in common with other adventure games. You must solve puzzles, navigate a dense urban environment, and use stealth to avoid powerful enemies. There are characters to befriend and things to collect. But there is an essential difference between Wander and its contemporaries: you play as a cat. It may seem like a small twist or even a gimmick, but in reality the shift in perspective makes Wander feeling refreshing and new. You are still in a large and complex world, but now you see it from the ground. It changes everything from exploration to puzzles. And, coupled with a bittersweet story that swings between joy, heartbreak, and even horror at times, it makes for one of the best games of the year so far.

In Wander, you play as a nameless cat who finds himself separated from his feline friends at the start of the game and thrown into an underworld populated by robots instead of people. At the start, the goal is simple: get to the surface. Quickly though, the quest becomes something more. Eventually, you’re joined by a cute drone named B12, and the mysteries of the world begin to pile up. On your way to the surface, you ascend through the layers of robot society – literally – learning more about not only their lives and histories, but also what happened to humans. On top of that are the zurks, a mysterious swarm of insect-like monsters that seemingly eat anything. This includes robots, which limits machines to various underground slums, as well as cute little cats.

The story also provides a nice twist on the classic silent protagonist. Unlike, say, Link’s The Legend of Zelda, here it makes sense that your hero never talks because, well, he’s a cat. You are sometimes able to communicate through the translation of your drone buddy, but more often than not, Wander is a game where your actions speak. You can flatter bots by doing favors big and small – it could be anything from helping a robo-grandmother knit a cozy poncho out of electrical cords or reuniting a father and son while traversing dangerous, sewer-filled sewers. zurk. WanderThe story is relatively short – I finished the game in around seven hours – but it covers a lot in this runtime, with themes ranging from wealth inequality to environmental disaster, not to mention fate. too important of the cat itself.

As for the way he plays, Wander straddles a few genres, depending on the moment. At first, you spend a lot of your time figuring out how to get around a very vertical city as a little cat. The controls are a bit different from a typical third-person adventure: while you can move around freely, the jump button is context-sensitive, so you can only jump when you see an X appear on a ledge. It took me a bit of getting used to – and it can slow things down when your life is at stake during an action sequence – but it also makes a lot of sense. In Wander, getting around is often a regular planning process as you plot your way up or down a building or down a dangerous path. It’s a bit like watching a house cat methodically climb over furniture and counters to reach the top of a refrigerator.

Getting around not only involves planning the right route, but also solving environmental puzzles that are usually easy to deduce. These can be as simple as chopping down a plank of wood to create a bridge, but, often, they’re more involved, with multiple steps that can involve anything from fixing machinery to scaring away robots with a well-placed meow. (There’s a button on the controller dedicated just to meowing.) This isn’t a straightforward action game where you have a lot of abilities at your disposal. Outside of a brief section of the game, you don’t have a weapon, so all you can really do is run, jump, meow, and perform other contextual actions like scratching at a door or knocking something on a shelf. The experience is more about exploring this densely populated world for clues and figuring out the best way to proceed given your limited chat skills. And while some of these actions exist in other games, the simple fact that you’re a cat, with limited options and a ground-level vantage point, makes them very different in practice.

That said, there are some action sequences, which, however short, add a needed dose of tension to the experience. At first, you’ll be dealing with swarms of zurks, which means either running away or using a very limited weapon to destroy them. These moments can be terrifying – they’re reminiscent of deadly rat swarms in 2019 A Plague Tale: Innocence – but they can also be frustrating. A few times I found myself dying repeatedly until I was able to memorize the bugs’ patterns and plan a safe escape. It was more tedious than grueling, though those moments were rare, and the game has a very generous checkpoint system so you never have to replay large sections. Later, the action shifts to stealth, as you have to completely avoid robots to infiltrate various locations. (This, of course, involves hiding in cardboard boxes.)

You go back and forth between those moments of action and adventure, and perhaps the most impressive thing about Wander that’s how everything is punctuated. I never felt like I had to spend too much time on one thing. As soon as any part of the game started to get boring – whether it was running from zurks or jumping across rooftops – I was able to move on. The same goes for history. It starts out as a simple quest at home, but as you progress through the different levels of the robot world and learn more about this not-so-implausible future, the stakes – both personal and existential – become much higher. . The ending is beautiful and tragic.

The experience is also full of quiet moments if desired. Wander gives you plenty of time to be a cat. You can scratch carpets and couches, mess up a board game in progress, or lay on top of a sleepy robot for as long as you want. These actions are sometimes necessary to solve puzzles, but more often than not they’re just fun and help get you into that cat mindset. The first time the cat puts on its harness is one of the funniest moments I’ve experienced in a game.

Wander lets you linger, but it doesn’t overstay its welcome either. I replayed everything in two sessions because I couldn’t stop: I just had to find out what happened next. When you mix this carefully plotted narrative with gameplay that lets you meow on command, you have an experience that scratches an itch I didn’t even know I had.