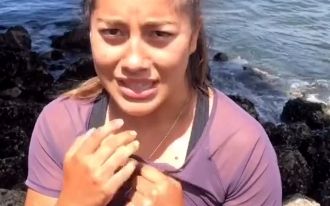 The bodies of a couple killed in Seattle have been found by teenagers following an application that promises a “random adventure”.

The macabre discovery was documented in a video one of the teens then posted on TikTok with the caption: “Something traumatic happened that changed my life.”

â€œHenry,â€ said to be an 18-year-old from Seattle, went out on June 19 with friends for a trip dictated by the Randonautica app.

The recently released app, which has become popular among TikTok users, randomly generates the coordinates of a nearby location. He directed Henry and his friends to a beach in western Seattle.

The video shows them investigating a suitcase on the rocky shore, first laughing and joking, then getting serious and calling 911.

The King County Medical Examiner’s Office said the bag, and a second one found in the water, contained the remains of Jessica Lewis, 35, and Austin Wenner, 27, a longtime couple. They had been shot.

Police did not reveal any suspects or possible motives.

The teenage video has been viewed over 23 million times.

Randonautica asks users to “have one goal in mind” when they embark on their “choose-it-yourself reality game”. Most of the resulting TikTok videos have a “Blair Witch Project” vibe, with Randonauts browsing through frightening or unexplained sightings.

We tried Randonautica, the latest adventure app and the craze for TikTok