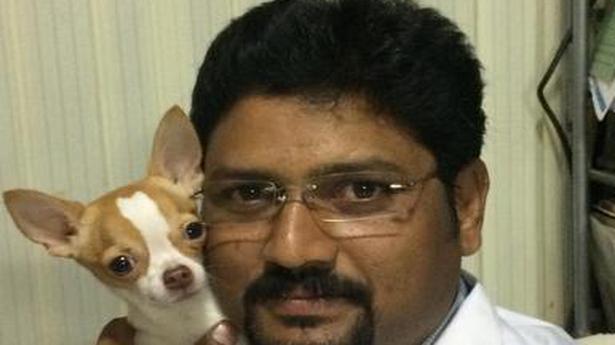 Meet V Srinivas, a veterinarian with adventure stories to share

V Srinivas is a veterinary surgeon and his favorite story to tell is about the sea voyage where his co-passengers were two giraffes! The three-day crossing from Malaysia to India was an adventure he will never forget.

â€œIt was my first time seeing giraffes and I couldn’t stay calm. I watched them every two hours. They weren’t used to the ship’s roll and pitch and needed extra care, so the zookeeper accompanying them and I made a bed of hay and slept in their pen, â€he laughs.

Whenever an animal is purchased from another zoo, Srinivas must be there to ensure its safe journey. Another memorable trip was when he took a train trip with Sireesh, a white tiger he accompanied from Hyderabad. â€œI had only been at my job for three months and I was so excited. I still remember the look on people’s faces with the terror written all over it when he yelled at the station, â€he laughs. Srinivas has many fascinating stories since his work over the past 20 years has revolved around zoo animals.

He starts his day at 8 a.m., examining sick animals admitted to the zoo hospital. Then he moves towards quality and quantity control of the feed to be given to the animals. â€œLike humans, animals also need a healthy and balanced diet. Since these wild animals neither hunt nor eat, a carefully designed diet is necessary to ensure their well-being, â€he explains.

He walks around the zoo, visiting all the animal enclosures to observe and spot changes in behavior. â€œThis is important because wild animals tend to hide the symptoms of the disease. In nature, showing signs of illness is an invitation to death, â€he adds. â€œAt first, I spent hours observing an animal to identify its disease. Now, with decades of experience under my belt, I can tell right away if there is a change in the animal and why, â€he says.

Srinivas also saves animals when they have come into conflict with humans. He has countless stories to tell about panthers eating livestock or elephants ruining farmers’ crops. Whether it’s bison, sloth bears or chimpanzees, Srinivas has managed to save them all.

While these adventures made Srinivas fall in love with his job, being a vet wasn’t always on his list. â€œI wanted to do MBBS but I missed it by a grade and had to settle for a vet course. After graduation I decided to choose research and teaching over practice, but I found a job in the state government and decided to give it a try, â€says he.

For three years he worked in veterinary hospitals in the rural areas around Visakhapatnam, mainly dealing with buffaloes, cows and horses. Then one day he was called to participate in the autopsy of a tiger at the zoo. â€œIt was the first time I saw a tiger and I felt an adrenaline rush. Seeing my work, they offered to join the zoo for a year, â€he remembers and he stayed.

Srinivas also operates a veterinary clinic called Visakha Pet Clinic in Seethammadhara. He started this in 2003, when there were barely two or three pet clinics in the city. He says he has at least 15 patients visiting him here.

â€œOver 80% are dogs while 15% are cats and the rest include guinea pigs and hamsters. Previously, the town’s dispensaries only provided deworming treatments and vaccinations. Now, clinics treat a multitude of illnesses and also perform surgeries, â€he says. One of the major changes in city animal care has been the runoff of specialty animal medications from metropolitan cities. “With the advancement of medicine, specialized tablets are now available not only for physical injuries, but even for their behavior problems,” he adds.

Unlike humans, animals don’t understand the need for medical attention and often scratch, bite or kick themselves, Srinivas explains. â€œStill, you can’t lose your temper. This job definitely makes you more patient.